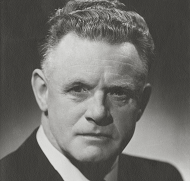 The Kabalarian Philosophy was founded in Vancouver, British Columbia, Canada, in 1930 by Alfred J. Parker (1897 - 1964). Mr. Parker made an independent discovery of the connection between numbers, the symbols of language, and the forces of intelligence which comprise the human mind. In the course of his life he pioneered this new understanding in the western world.

Mr. Parker was a seeker after truth and a true humanitarian. Force of circumstances -- a sickly childhood during which he received the death sentence from the family physician, a bed-ridden mother suffering from heart trouble and other afflictions -- caused him to seek diligently into the reasons for such sufferings. He was loath to accept in blind faith the age-old belief that unnatural conditions are all a part of God's plan, which must be accepted without question or complaint.

In an orderly universe it did not seem to him to be logical that humanity should submit with quiet resignation to things that were not orderly, and his reverence for the creative principle led him to believe that the things which were wrong were not of God's doing, but of humanity's.

Mr. Parker believed in the axiom God is Love. He could easily understand that suffering could come from wrong-doing, but he saw many suffer who had wronged no one, who, in fact, were kindly and helpful to others.

He began to conclude that there were laws of which we were ignorant, laws created for our well being, laws that -- if obeyed -- would bring to us harmony in all things; not only harmony, but perfect health and sufficient of the material things of life to supply our needs. If this were so, then poverty, sickness, and other afflictions were sins in the sense that, somehow, somewhere along life's pathway, we were disobeying the laws of nature, and disobedience brings its penalties.

Concluding that the answer to the problem lay in nature, which is the handiwork and the reflection of God, he began to delve therein. This search led him to a study of all the leading spiritual philosophies of the East and West, finally arriving at the point where he could clearly discern that there should be no division between the concepts of the East and of the West. The very lack of unity between eastern and western thought created discord, for in unity there is harmony.

It became apparent that there was a lack of basic principle that prevented the merging of the two concepts into a balanced picture through which the God Principle could be seen working in both the spiritual and the material channels of life.

The concept of the East, wherein it is one's duty to unite one's mind with one's inner consciousness and thus attain mastership, becoming the mouthpiece of wisdom, and the concept of the West, by which one seeks through scientific channels the reason of being through a fundamental and basic principle, are relative. When blended, united, and thus balanced through understanding, they would provide the world with a perfect religion, a philosophy of life in its entirety.

This was the picture he could so plainly see, and to seek the underlying Principle became his goal.

He concluded that Kipling erred in his much-quoted poetical expression concerning East and West, and that he should have said: "For East is East and West is West, and ever the twain must meet." Mr. Parker felt keenly the need to bridge the gap between the eastern and western religious philosophies and dedicated his efforts toward the understanding of universality, for we are One Breath, One Life, One God.

This universal concept is a vital factor in the teachings of the Kabalarian Philosophy.

Realizing that all religious philosophies must be based upon the same spiritual principle and the same ideal (although the principle had somehow become lost and thus the ideal distorted), he nevertheless observed that all religions contain much that is good, provided that "good" is applied.

He discovered a basic lack: the fact that the Christ principle, so essential to human welfare, has not been conscientiously applied in the lives of peoples and of nations, nor in the lives of individuals. Recognizing the wisdom of the Christ spirit, its ability to create fullness and completeness in one's life and in all human affairs, he wondered why humanity so foolishly, so purposefully, so deliberately and consistently, ignored or violated a divine principle when the ignoring or violating of that principle leads to sickness, poverty, disharmony, and chaos, particularly so when human desires and hopes are for happiness and health, and all religious doctrines advocate the working out and adherence to a principle so essential to our destiny.

Feeling that there was the crux of the whole theme of life, he pondered the vital questions: What is this motivating force of life called mind? Where does mind originate, and through whom? Through what exact principle, applicable to each and every individual of all races, colors, and creeds, could one become a master in one's own right?

Mr. Parker realized that a basic principle had been either lost or purposely suppressed to prevent humanity from developing intellect and spiritual concept. This was evident in all things around him, and so he set himself the task of seeking that key which would unlock the secrets of mind and unite spiritual concept with scientific principle, that humanity might measure and understand the essence and working of the divine mind through its individual channels.

Divine mind is the ruler of all things great and small, but the purposes of that divine mind are thwarted when certain of its channels of operation, the minds of human beings, are blocked by ignorance, warped by prejudice, shackled by age-old beliefs based on fallacies and superstition, and mired by mundane thoughts that pay no heed to things spiritual.

It is an old saying, "When the student is ready, the master will appear." So it was in his case, for there was brought into his life a very beautiful and spiritual soul in the person of Swami Rai Mohan Dutta, a very highly educated holy man, fluent in seven languages, who had attained spiritual mastership. Despite the Swami's humility and unassuming nature, he was widely known in many countries.

Mr. Parker became acquainted with the Swami when in the United States and was privileged to associate with him and study under him for several years. The Swami's boundless wisdom and sincere spiritual nature inspired him to continue his quest for the hidden principles behind the mysteries of life, and in due time he found the key by the Swami's aid. It is this key that formed the basis and the foundation of the Kabalarian Philosophy. The Swami told him that it was his mission to formulate a philosophy that would combine the spiritual concept of the East and the scientific concept of the West into one harmonious whole.

It was owing to this philosophy that Mr. Parker himself gained perfect health and his mother was cured of her heart condition. And so, he decided to dedicate his life in this service to his fellow human beings.

Innumerable people owe their very lives, their happiness and peace of mind, to the wisdom of the Kabalarian Philosophy which, when understood and applied, produces beneficial results in so amazingly short a time. It became Mr. Parker's vision to bring the knowledge of these principles to people all over the world so that everyone could have the opportunity to create a happy, balanced, successful, and purposeful life.

All laws of nature are irrevocable. There is no favoritism for anyone. These laws penetrate into the smallest details of our lives. Therefore, no matter what may be the nature of the problem, it can be solved by the application of the laws contained within the Kabalarian Philosophy.

Mr. Parker wrote extensively; his many books and class pages are the legacy of his work through many years. In his lifetime he helped thousands of people to live a more constructive life. He, in dedicating his life to the service of humanity, searched for and found the principles that governed life.

Thought for the Day

Copyright © 2020 Society of Kabalarians of Canada All rights reserved.    Ver: A - www.kabalarians.com - EdgeNew